How to mitigate DnsAdmins privilege escalation ?

Glad to see you in this second part of this post. In our previous article we showed which rights were involved in the DnsAdmins privilege escalation. Now let’s talk about how to properly mitigate this.

First of all, a few words about the Security Descriptor Propagator (SDProp) ;

Additionally, permissions inheritance is disabled on protected groups and accounts, which means that even if the accounts and groups are moved to different locations in the directory, they do not inherit permissions from their new parent objects.

Even if this is not a post about detailing the SDProp mechanism, why is this important ? Because this security mechanism called Security Descriptor Propagator (SDProp) aims at cutting any potential control paths to these Protected Users and Groups as they are highly privileged.

Unfortunately, DnsAdmins is not targeted by this security mechanism .

What is the algorithm to define which object deserves to be protected by the SDProp ? (taken from the ADTS - 3.1.1.6.1.2 Protected Objects) ;

No mention to DnsAdmins here, even if we know that being member of DnsAdmins compromised domain.

At least we can manually set ACEs as restricted as the AdminSDHolder ones thanks to the cmdlet Set-ADSyncRestrictedPermissions from the AdSyncConfig.psm1 module. This is part of the recommendations shared by this Active Directory guide.

The AzureADConnect.msi package can be downloaded from https://go.microsoft.com/fwlink/?LinkId=615771.

The AdSyncConfig.psm1 module may be extracted from the Azure AD Connect installer with msiexec:
msiexec /a "AzureADConnect.msi" /qb TARGETDIR=c:\temp\

Keep the DnsAdmins group empty, prefer a delegation group to manage your DNS service and to allow DNS zone updates. This is done thanks to the two following steps ;

In the domain naming context, under the CN=System container, set the following access rights on the CN=MicrosoftDNS container for your trustee delegation group ;

In the DC=DomainDnsZones naming context, on every zone you wish to delegate management, enable inheritance and set the following access rights on the CN=MicrosoftDNS container for your trustee delegation group ;

This is an overview of the DnsAdmins security descriptor ; 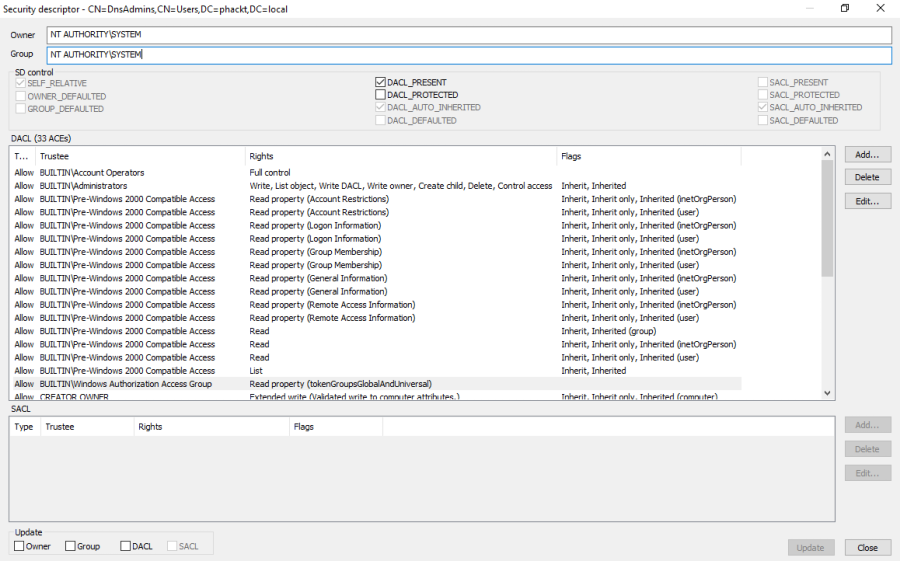 The group should be changed, DnsAdmins should be owned by Domain Admins ;

Set rights at least as strict as the AdminSDHolder ones ;

You can check that the DnsAdmins security descriptor is blocking inheritable ACEs ;

You should get a security descriptor which should look like this ; 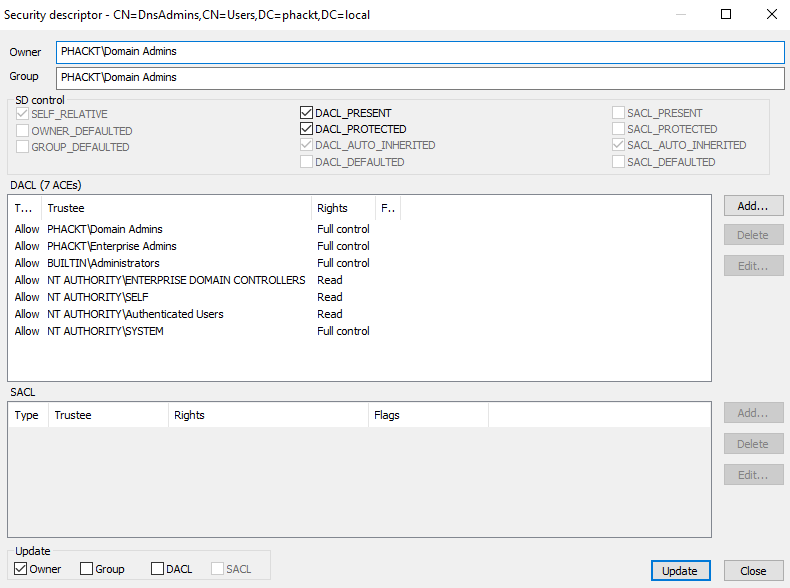 The DACL_PROTECTED parameter shows that the descriptor is blocking inheritable ACEs

As you see it is a way more restrictive than the original AdminSDHolder security descriptor shown below ; 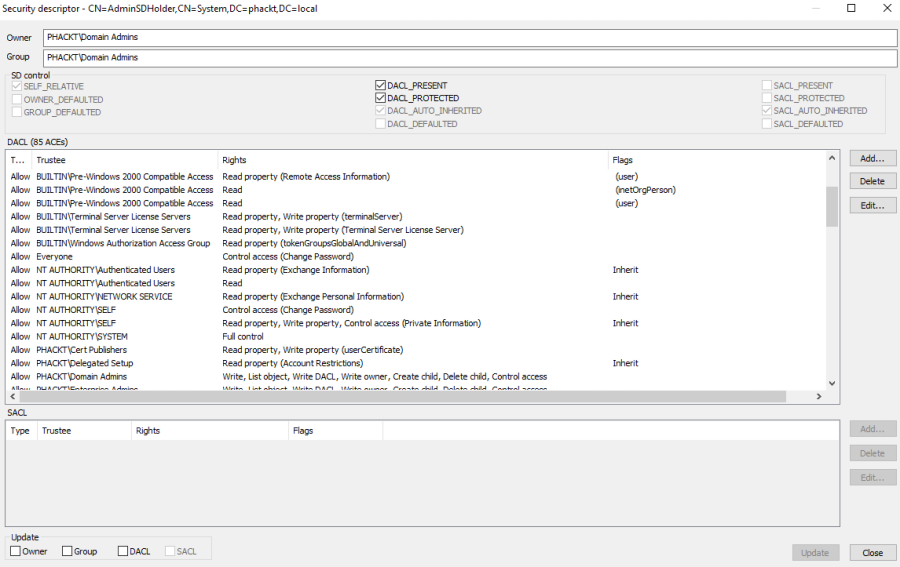 Also you can set, on the DnsAdmins group, a Deny ACE forbidding Everyone for the WRITE_OWNER right (remember that being owner of an object provides the WRITE_DAC and READ_CONTROL over the object).

However if you do this remember that replaying the Set-ADSyncRestrictedPermissions cmdlet will reset the DACL and delete this ACE (on the other hand you could update the AdSyncConfig.psm1 module to match your needs).

As seen previously, deleting the DnsAdmins RIGHT_DS_WRITE_PROPERTY_EXTENDED right for the MicrosoftDNS container will prevent an attacker from writing the registry key to set the path of an arbitrary DLL to be loaded by the DNS service. 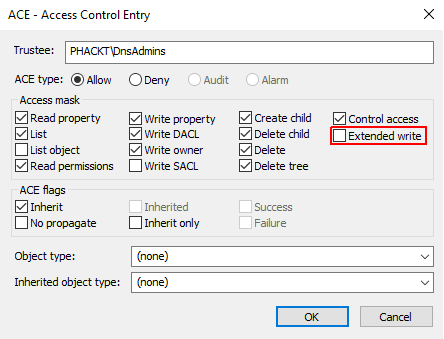 However i don’t know what is the impact if you benefits from the Microsoft support and if they need to exceptionally perform a maintenance operation, from DnsAdmins, which needs this right (nevertheless i never faced this situation).

Firstly i thought it was possible to add a new security group to be targeted by the SDProp mechanism but no, it’s not (and as i was said, it’s not for tomorrow). At least we can manually set some restricted rights on it. Also i’m having a look at creating a routine which will frequently override the DnsAdmins ntSecurityDescriptor based on the AdminSDHolder one to simulate the SDProp mechanism for custom groups.

DnsAdmins is one of the so many ways an attacker can gain control of your Active Directory. If you are looking for a complete Active Directory security assessment checklist : https://www.cert.ssi.gouv.fr/uploads/guide-ad.html.

[UPDATE 2021/12/06]: According to this article, it seems that the issue has been finally fixed by Microsoft.

Thanks folks for reading,
Cheers.